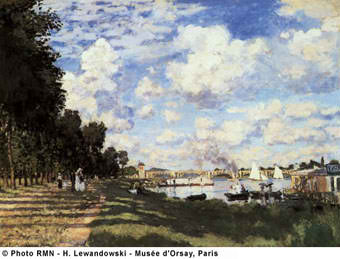 "My only merit," Monet wrote later in life, "lies in having painted directly in front of nature, seeking to render my impressions before the most fleeting moments." This is one of seventy-five works Monet painted of the Seine River in Argenteuil, a yachting center west of Paris. It combines two favorite Impressionist themes: fashionable, leisurely figures strolling, boating, and bathing, and an industrial backdrop of bridge and smokestack. Monet lived and painted in Argenteuil for several years; today the town is best known for his images of it.

Additionally, Monet lured his Impressionist friends - Renoir, Sisley, Pissarro, Manet, and Caillebotte - to paint in Argenteuil, which was easily accessible from Paris by railroad.

Like most of his work, The Port at Argenteuil shows Monet’s fascination with the ever-changing quality of light and color in different weather, and at different times of the day. Notice the long stripes of tree shadows in the foreground. Against the bright sky, these deep shadow tones capture a breezy late afternoon in summer.

Monet usually "primed" or covered his canvas with a layer of warm gray or light tan first and then painted his subject in the short, bold brushstrokes typical of Impressionism. The scene is composed of restful, horizontal elements - the shadows of trees, the water, bridge, and clouds. Monet arranged these elements in a series of planes to create depth. The plane closest to us contains the strollers, seated onlookers, boaters, and other figures; a second plane behind it has sailboats, a steamship, and a boathouse; the last and most distant is the bridge and horizon.

Monet grew up in Le Havre, France, where an aunt first financed his painting studies. Later, in Paris, he met and was influenced by future Impressionist colleagues Sisley, Renoir, and others.

He was a leading figure in the Impressionists’ first group exhibition in 1874, which one critic ridiculed as "a collection of freshly painted canvases smeared with floods of cream." It was Monet’s painting of the Le Havre harbor in Impression, Sunrise, that gave the fledgling movement its name. Until late in his life, Monet suffered frequent personal and professional ups and downs. Yet, he never wavered in the quest to paint his direct, sensory impressions of nature without intellectual thought. "Paintings aren’t made with doctrines," he declared.

Have the students create a landscape with depth. Have them choose three objects that they want in their landscape. Decide which objects will go in the foreground, middle ground, and back- ground.

Draw the foreground object first. They should make this object large. Next, decide what objects will go in the middle ground, drawing it slightly smaller in the middle portion of the paper. Finally, repeat this process for the background object, making that object the smallest. To create a landscape with depth and overlapping forms, add more objects and horizontal lines to indicate land. Discuss overlapping and background, middle ground, and foreground.

Many Impressionists were interested in views of reality. Scenes were painted outside, with an emphasis upon what interested the artist on the day the painting was created.

An impression is a vague notion, memory, or split-second look at something. Have your students glance at the transparency for thirty seconds and then cover it with paper. Ask them to write a poem beginning "My first impression was…" Next, ask them to look at the transparency closely. Continue the poem by writing "But when I took a closer look I noticed…" Share the poems. Discuss the difference between an impression and an analysis of something.

The people in the reproduction look as if they might be out relaxing on a weekend afternoon. What do you and your family do to relax during weekends? Have your students pick a partner and share what they enjoy doing with their families. Make a chart to compare and contrast leisure-time of their families with those depicted in this and other transparecies in the packet. How do they compare to what the people in the picture are doing? Have them find out about other forms of relaxation in the 19th century.

Continue reading on to the next page, #2: Degas, The Ballet Scene from Meyerbeer's Opera.